As a .Net development company Devox Software delivers robust, secure, and scalable .Net applications to businesses across the globe. We have proven expertise and a growing talent pool of .Net developers to both build your project from the ground up and scale up your existing .Net software development team.

Advantages of Our .Net Development Services

Perhaps there’s no other technology company with such a full and coherent ecosystem that checks off all boxes for engineers, from IDEs and frameworks to cloud services.

.NET Core is a cross-platform .NET implementation that allows the code to run on macOS, Windows, and Linux.

The deployment itself is as easy as copying a folder.

From the very beginning, .NET has relied on a just-in-time compiler (JIT) to translate Intermediate Language (IL) code to optimized machine code.

One of the most popular web framework in the world. Additionaly it is open source.

The solutions they’re providing is helping our business run more smoothly. We’ve been able to make quick developments with them, meeting our product vision within the timeline we set up.

Listen to them because they can give strong advice about how to build good products.

We are a software startup and using Devox allowed us to get an MVP to market faster and less cost than trying to build and fund an R&D team initially. Communication was excellent with Devox. This is a top notch firm.

Their level of understanding, detail, and work ethic was great. We had 2 designers, 2 developers, PM and QA specialist. I am extremely satisfied with the end deliverables. Devox Software was always on time during the process.

We get great satisfaction working with them. They help us produce a product we’re happy with as co-founders. The feedback we got from customers was really great, too. Customers get what we do and we feel like we’re really reaching our target market.

I’m blown up with the level of professionalism that’s been shown, as well as the welcoming nature and the social aspects.

Devox Software is really on the ball technically.

Great job! We met the deadlines and brought happiness to our customers. Communication was perfect. Quick response. No problems with anything during the project. Their experienced team and perfect communication offer the best mix of quality and rates.

The project continues to be a success. As an early-stage company, we're continuously iterating to find product success. Devox has been quick and effective at iterating alongside us. I'm happy with the team, their responsiveness, and their output.

We hired the Devox team for a complicated (unusual interaction) UX/UI assignment. The team managed the project well both for initial time estimates and also weekly follow-ups throughout delivery. Overall, efficient work with a nice professional team.

Their intuition about the product and their willingness to try new approaches and show them to our team as alternatives to our set course were impressive. The Devox team makes it incredibly easy to work with, and their ability to manage our team and set expectations was outstanding.

Devox is a team of exepctional talent and responsible executives. All of the talent we outstaffed from the company were experts in their fields and delivered quality work. They also take full ownership to what they deliver to you. If you work with Devox you will get actual results and you can rest assured that the result will procude value.

The work that the team has done on our project has been nothing short of incredible – it has surpassed all expectations I had and really is something I could only have dreamt of finding. Team is hard working, dedicated, personable and passionate.

I have worked with people literally all over the world both in business and as freelancer, and people from Devox Software are 1 in a million.

Pros and Cons of various architectures that may be used in your project. 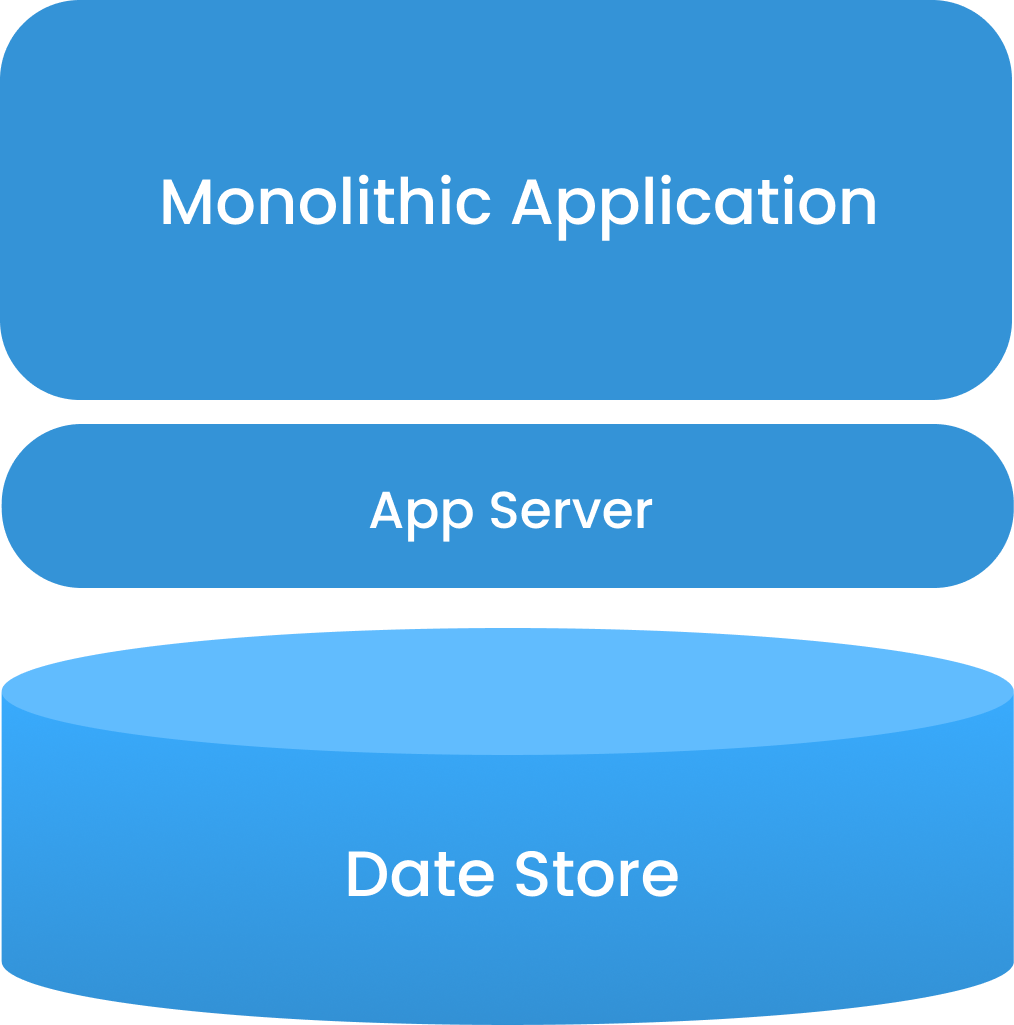 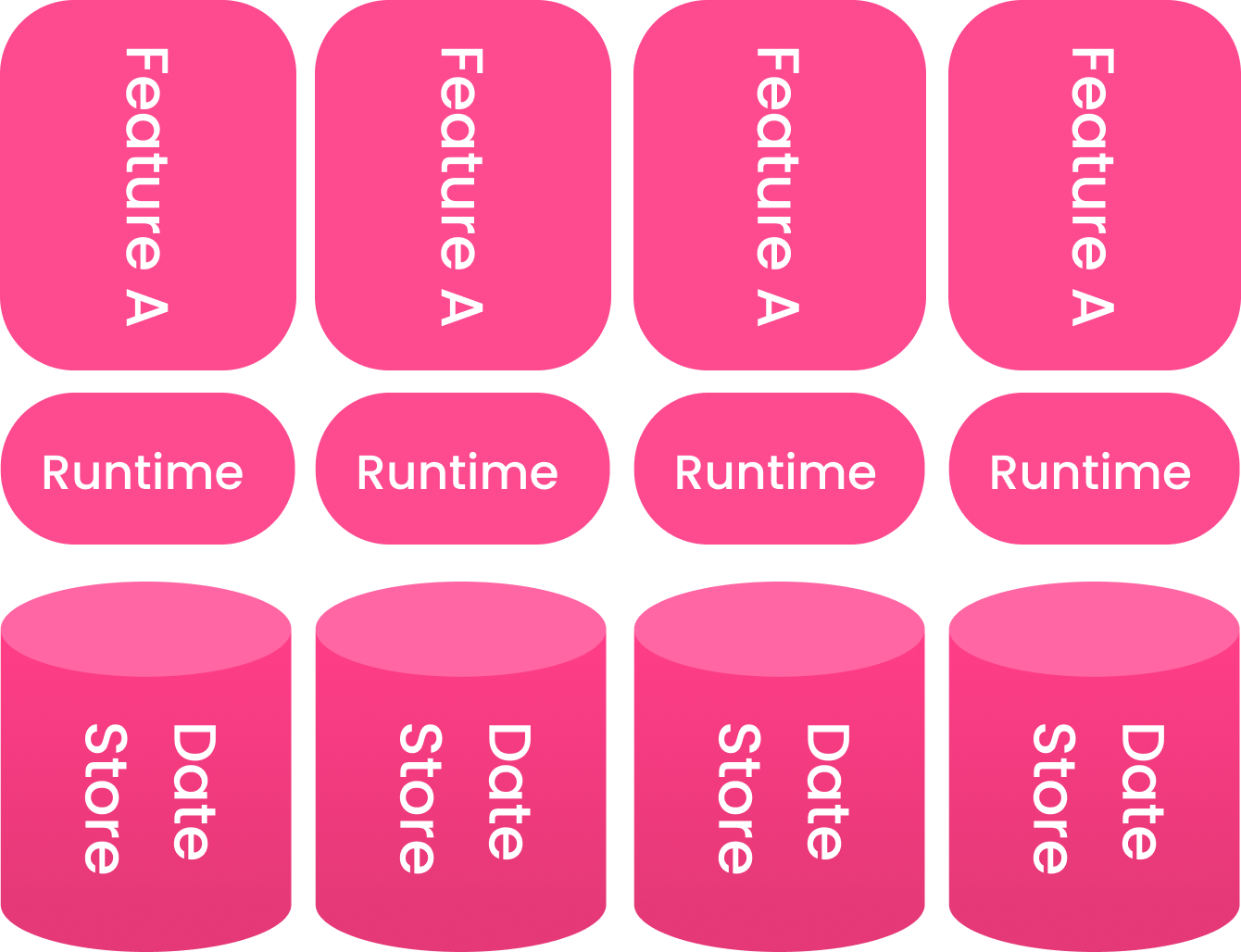 Easy implementation. Monolithic architecture is known for its development speed and simplicity. It is easier to create an application on one code than orchestrate various components.

Easy debugging. A single code base makes it easy to track errors and perform end–to–end testing. Unlike microservices, you don’t need to manage different run–time environments.

Simple deployment. Monolithic architecture is easy to deploy and scale. All you need is to use a script that loads your module and runs the application.

Less security and other concerns. Since your software sits on a single code base, you’ll have fewer security problems and issues with login, caching, and others.

High degree of software complexity. Since everything is in one application, you have tight coupling between components. So, it becomes harder to scale vertically.

Low flexibility. You can only rely on a single technology. It means that any changes will result in rewriting the whole application, which is costly and time–consuming.

Scaling limitations. You can scale monolith apps horizontally as a whole. No other type of scaling is possible for this type of infrastructure.

Scalability. SOA operates on different servers within an environment. Thus, it gives the ability to quickly adapt IT to changing business challenges and build new solutions on existing assets.

Easy debugging and testing. SOA services are small and independent. Therefore, it is easier to test and debug the applications which adds credibility to the service–oriented architecture.

Platform independence. Services encapsulate implementation details from other components. It means they are independent of the platform on which they’re running, contributing to the manageability of created systems.

Easy maintenance. As this type of architecture is independent, it is easier to update and edit any service. You don’t have to worry about affecting other services.

Loosely coupled. Services are independent of each other. You can modify one application without making changes in other components.

Reusability. The ability to build applications based on reusable service interfaces allows you to respond faster to new business opportunities. You don’t need to re–create and integrate interfaces into each new project.

Large upfront investment. SOA architecture is known for its high costs. These are associated with HR, development, and technology investments.

High bandwidth server. The frequency of sending and receiving messages may reach a million requests per day. Therefore, you’ll need a high–speed server to run a web service.

Extra overload. All inputs should be validated before being sent to the service. If you are using multiple services, then you’ll get system overload with further computation.

Autonomy. Microservices allow for more independence to work autonomously in cross–functional distributed teams. A microservice can be deployed and scaled as needed without impacting other services.

Flexibility in technologies. This architecture type includes decoupled services written in different programming languages and storage technologies. Thus, you can select a suitable tech stack for the specific needs on any device.

Increased scalability. Unlike monolith architecture, you can scale individual services independently when needed. It means that you don’t have to scale the whole system.

High reliability. Since microservices abstract the realization and the execution environment, applications remain intact by a single failure or damage. Fault isolation also helps identify the root cause of performance issues easily.

Reusability. The reusable modules maximize the utility of essentials. You can reprofile efficient code to attain multiple tasks and reduce the dependencies between development teams.

Continuous integration and delivery. Microservices architecture allows for faster and more independent deployments. You can break the project into small independent modules and deploy them as individual services.

Complex communication. Since each functional element is isolated, you need to establish secure communication between them. As the number of services increases, the complexity of constructing connections will increase.

Challenging deployment. The number of elements complicates coordination. Thus, deployment becomes more difficult since developers need to take over various autonomous services and communication between them.

Difficult global testing. The more services you have, the more complex testing will be over a distributed environment. Interactions between the services pose the greatest challenges.

In some cases we apply the CQRS design pattern that is used in microservices architecture, having a separate service, model, and database for insert operations. This acts as a command layer and separates service, model, and database for query data, which acts as a query layer. The read database can store a denormalized model where databases like NoSQL may be leveraged. The command layer inserts data into a store. The query layer is querying data from the data store. This allows benefiting from the query database to read data rapidly and keep it consistent.

Our .Net Development Process Make the Most of IT

To extend your existing team, you select potential candidates from the pool of CVs we offer

Can you Migrate my legacy .Net app to .Net Core?

Yes, we can. Migrating an outdated software application to .NET Core opens up a wealth of new IT opportunities:

At Devox Software, our team of expert .NET core developers makes this migration friction–free and smooth.

Can I hire a .NET coder on a full-time basis?

Yes, you certainly can. Our ready–to–hire skilled .Net professionals boast expertise in a full suite of .Net technologies to deliver a quality product either on a full–time basis or according to your needs.

Can I leverage your .NET development expertise for minor alterations?

Yes, you can. In this case, our developers will charge hourly for the tasks completed and provide the cost and time estimates.

Do you have a dedicated .NET team to hire?

Yes, we do. You can hire a dedicated .NET team, an individual developer, and other tech–related specialists on demand. In each case, we provide you with an engagement model and a Non–Disclosure Agreement.

How much does it cost to outsource .NET development?

Bringing your .Net development offshore drives down the development costs. Since the overall cost of living is lower in offshore destinations and the technology industry is backed up by business–friendly tax regimes, the .Net developer rates are twice as lower as in popular IT hubs like the US.

Got a project
or partnership in mind?

.NET Developer Salary Guide Based on Experience and Location

.Net is one of the most famous and widely used frameworks in software development. This ecosystem is designed and backed by Microsoft to facilitate easy desktop and web application engineering. Also, its re-usable code and object-oriented programming allow businesses to…

What are IT Outsourcing Services?

IT outsourcing services refer to the business practice when companies delegate IT-enabled business processes to external service providers. Along with full-scale processes, organizations can also farm out application services and infrastructure solutions, as well as a spectrum of other tech…

We Are A Top IT Services Company In Ukraine According To MC.Today

Over the last decade, Ukraine has established itself as a major IT hub in the global arena. The local tech landscape has always been a breeding ground for industry-leading tech solutions and world-class software companies. More than 4000 software agencies…

Thank you for contacting us!

You will get answer within the next 24 hours.
Contact us