Software development has a huge range of earning potential. Probably, this is the main reason for the recent surge in new IT job openings. According to LinkedIn’s list of the most in-demand jobs for 2021, software engineers are among the most coveted professionals this year.

So the salient question arises: Is software development a lucrative career path? With this in mind, our team has performed in-depth research designed to uncover an average front end developer salary by country. We have also collected the data on the median back end developer salary in 2021.

The geographical coverage includes such locations as the United States, Canada, and Ukraine, as well as other European hubs, Canada, and Australia.

Our data builds on both global and local job boards and employer review sites, including Glassdoor, Payscale, and Talent.com.

Back end & Front-end developer salary in the US

The United States has always been at the forefront of the digital revolution. Therefore, the local technology sector is vast with A-list IT giants like Apple, Microsoft, and Google establishing their leadership.

The mid level front end developer salary increases with mid-level engineers earning between $84,166 and $105,000. The average senior front end web developer salary tops the list and reaches up to $130,000, according to Glassdoor.

Front end vs back end developer salary also varies greatly by state. Normally, it depends on how close you are to Silicon Valley or another major tech hub. 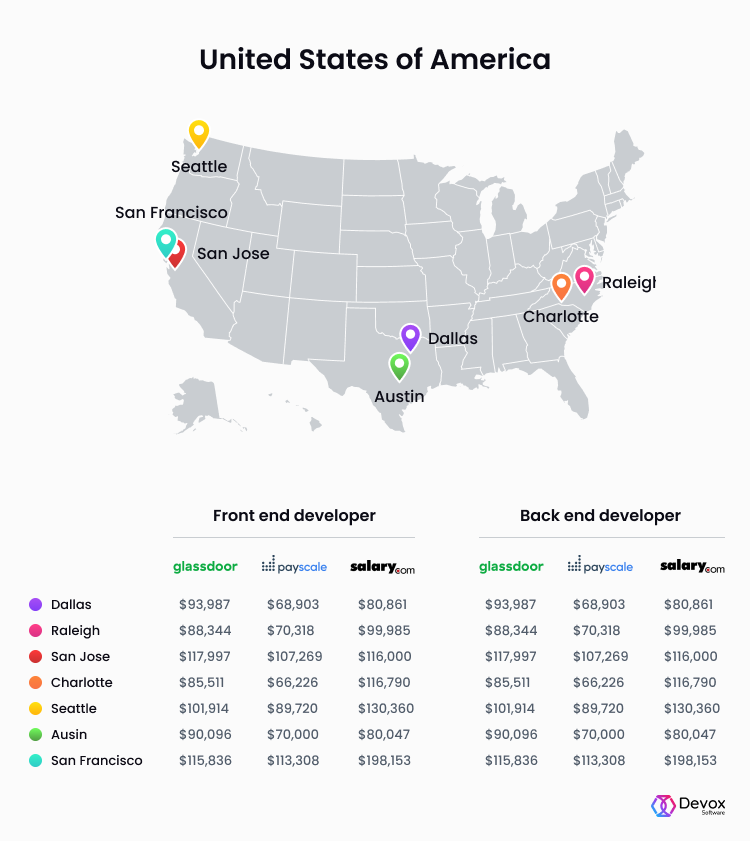 If we’re talking about the average back end web developer salary nationwide, the tendency remains. California has also been crowned the most well-paid location with a median of $165,254- $179,088. Thus, a traditional back-end developer salary in San Jose ranges between $136,177 and $162,935.

As for the other states, a standard back end developer salary is the closest to the medium of $78,808. In Charlotte, North Carolina, back-end specialists make around $89,560 per year. The Texas number is slightly higher with a median back end web developer salary of $80,047-$124,371.

All totaled, California heads the list of the most salaried jobs both in the front – and the back-end niche. Seattle, Washington follows with its higher-than-average wages. North Carolina and Texas come in last, yet contribute to the ever-high front end vs back end developer salary compared to other locations.

The highest paying front end developer skills in the US

Front-end engineers come in different flavors, each having its unique tech stack. However, not all technologies are compensated equally.

According to PayScale, the average front end developer salary differs greatly based on the need for a specific skill:

Let’s now get relocated to Europe and the local front end vs back end developer salary.

Here we analyze 14 countries in different regions to identify main front end vs back end developer salary trends. Thus, our comparison includes such tech destinations as Austria, Belgium, Denmark, Finland, and France as well as Germany, Ireland, and Luxembourg. We’ll also gauge the rates in the Netherlands, Norway, Sweden, Switzerland, the United Kingdom, and Ukraine.

Salary of a Front-End Developer in the UK

In the United Kingdom, the average front end developer salary reaches up to $58,333. More than $74,000 is offered to back-end specialists by country. 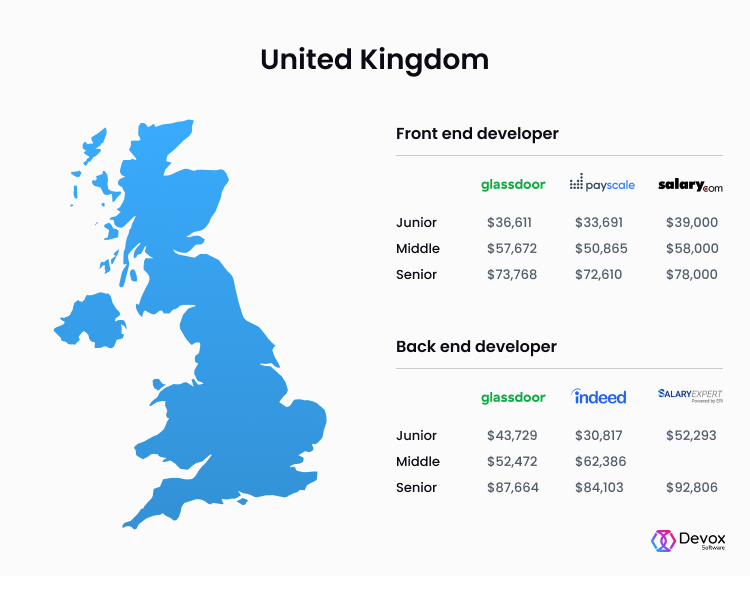 If we’re talking about server-side technologies, the average back end developer salary is substantially higher than the front-end one. Thus, UK-based engineers competent in the back end make around $72,817 to $75,388 per year.

Benelux region countries also partake in stimulating European tech progress. All of their economies are innovation-driven, hence the medium front end vs back end developer salary keeps the bar quite high. 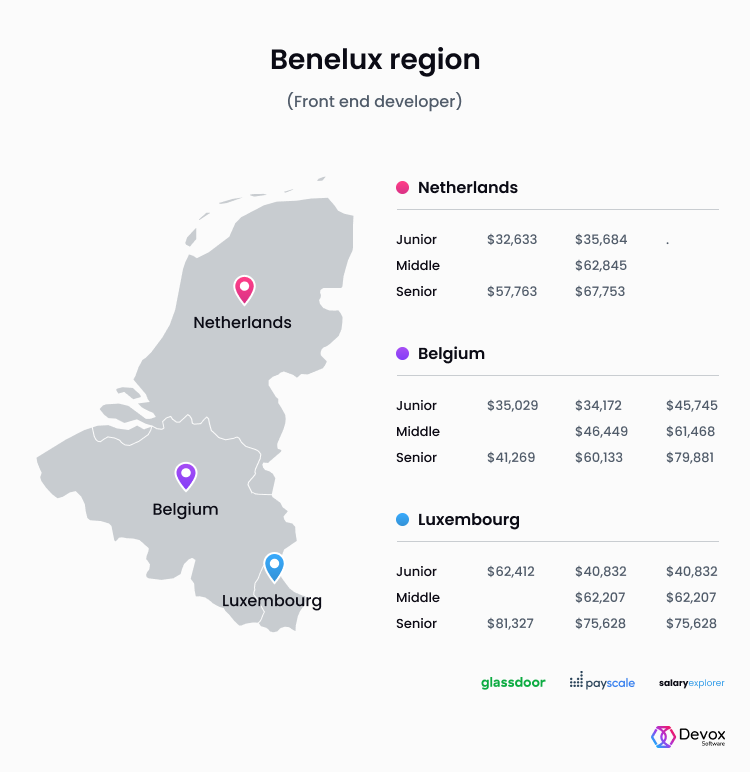 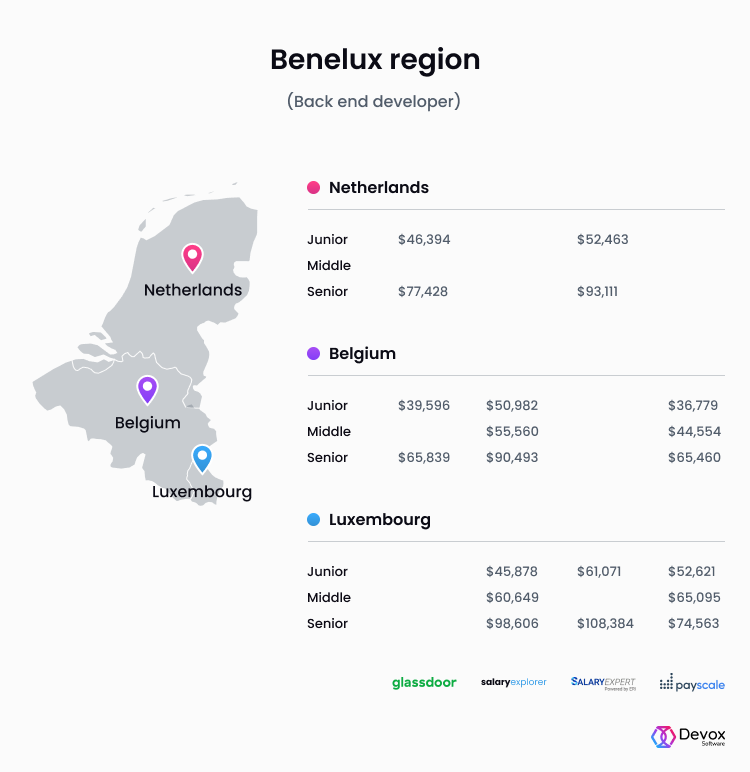 As for the back-end skills, Salary Explorer claims that the average back end developer salary in Luxemburg is around $76,419 per year. On the contrary, Salary Expert reports a much higher number of $107,097 per year. Payscale demonstrates the lowest number with the national average of $53,950 per year.

The national back end web developer salary is close to the numbers mentioned above. Thus, a back-end programmer can price one’s services up to $87,813.

The Netherlands completes the list of Benelux countries. The nationwide standard in salaries keeps up with nearby IT hubs. An average salary of a junior-level front-end developer in the Netherlands is $35,684. But if you have extensive experience, you can charge $57,763-$84,000 for yearly services. Mid level front end developer salary traditionally takes the middle position with a medium of $62,845.

Backend development is priced higher with a minimum of $63,525 for entry level and a maximum of $85,189 for established specialists.

Technology evolves quickly and in-demand IT skills rotate as well. Here’s how some of the most coveted skills for front end development are paid in the region: 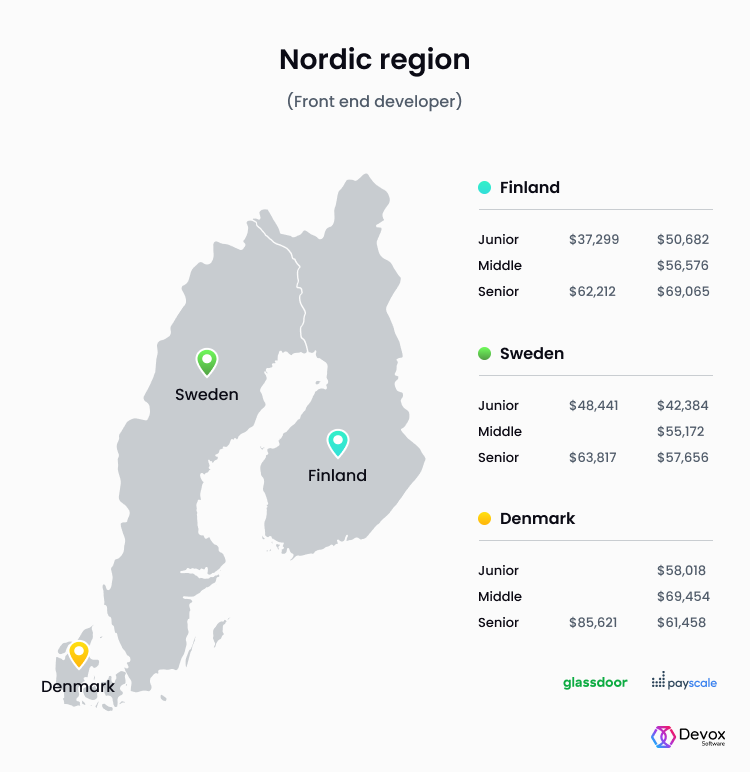 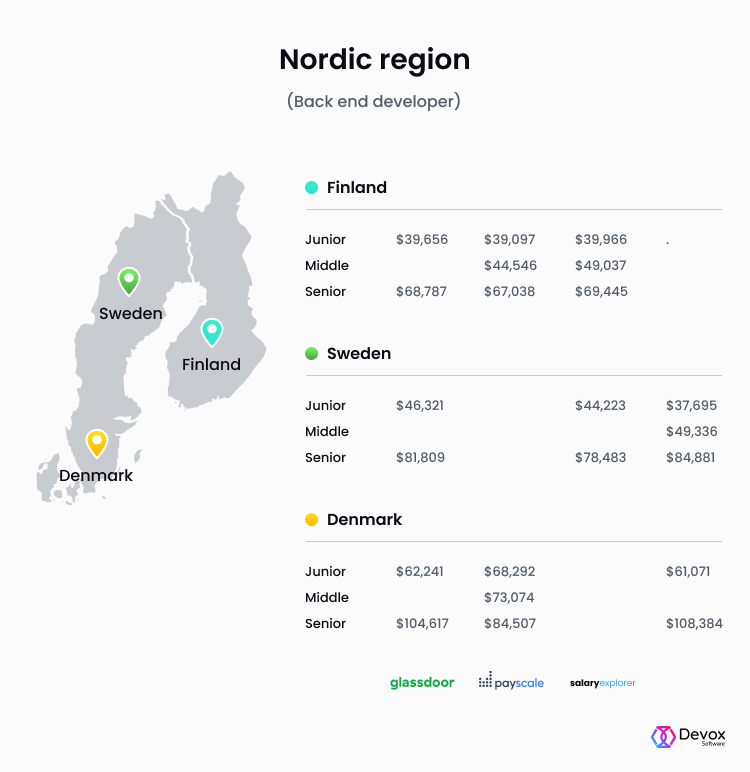 In 2021, Nordic tech companies are chipping into the bustling tech ecosystem. Prompted by their financially supportive governments and forward-thinking societies, Denmark, Finland, and Sweden are also the breeding ground for front-end and backend development.

The seniority level impacts the amount of back end remuneration as well. The highest back end web developer salary belongs to senior specialists with a median of $104,617. Entry-level engineers get the lowest wage of $87,168.

Surprisingly, the average back end developer salary appears to be lower than that of the front-end specialists. Thus, the typical back-end developer salary in 2021 is $52,258. The amount of skills and knowledge is also the main deciding factor for the size of a yearly remuneration.

For example, the average junior back end developer salary in Finland is $39,656, while mid-level coders raise their rates to $44,546 per year.

For the DACH region, the tech sector is also deemed an income generator for the local economy. Hence, German-speaking Europe is also considered to be a hotbed of digital transformation. 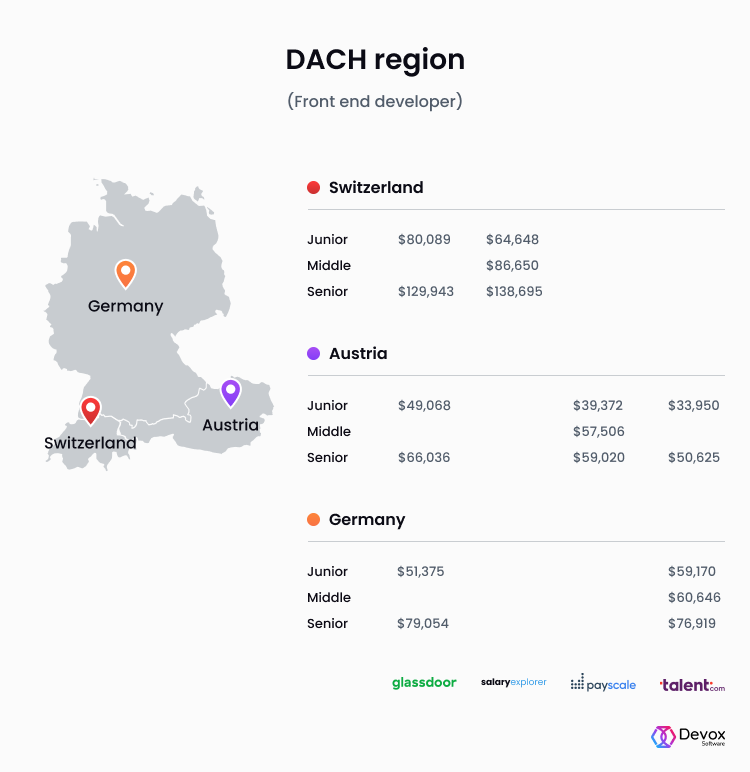 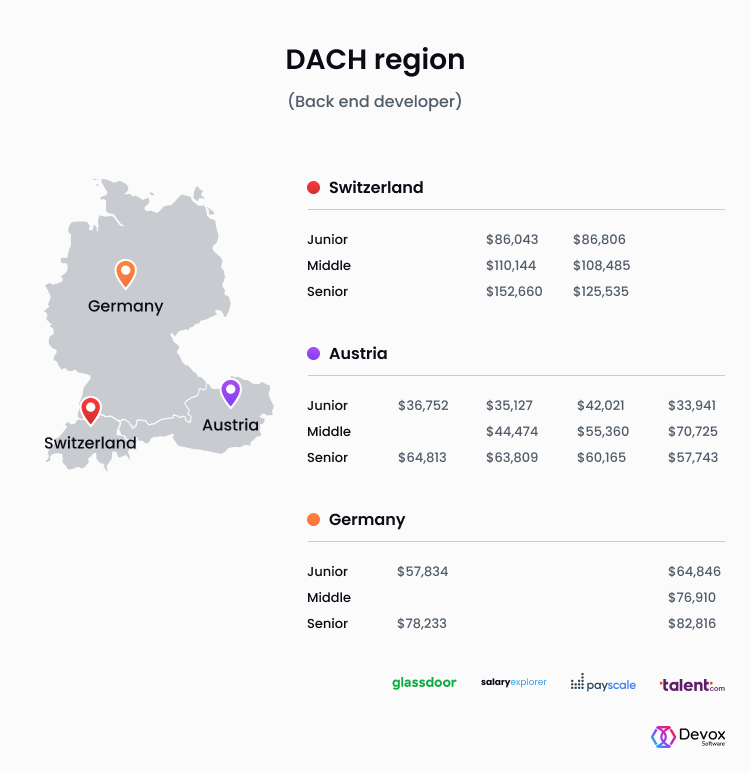 Salary of a Front-End Developer in Ireland 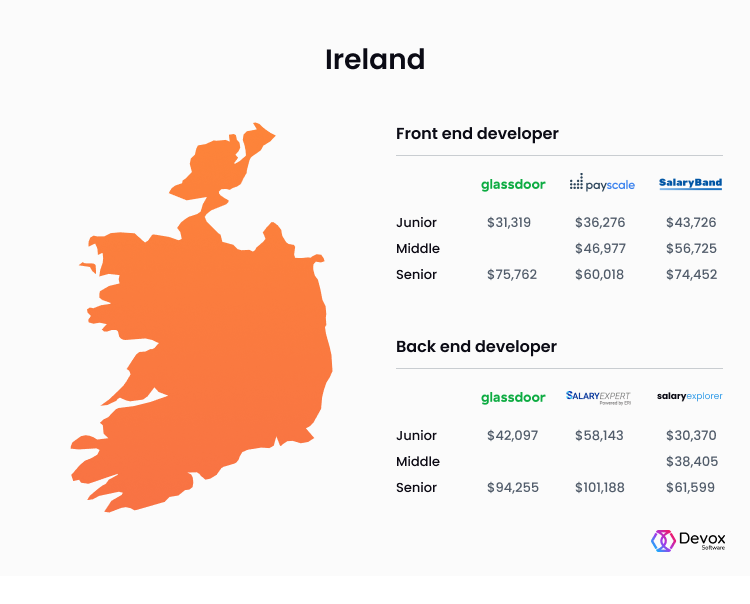 The estimated front-end developer salary in Ireland is reported to be as much as $48,466, according to Payscale. Entry level positions start at $31,319 per year while most seasoned professionals make up to $75,762. Programmers with more than two years of experience can earn up to $56,725 per year.

Numbers grow when it comes to the average back end developer salary. Fledgling back-end coders can expect to make up to $58,143, whereas senior services are valued at an annual of $101,188.

Salary of a Front-End Developer in Ukraine 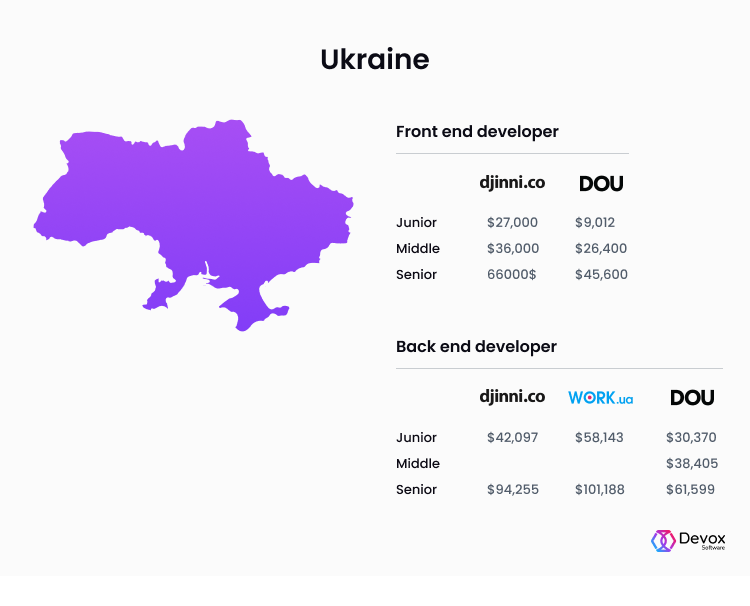 Comparing front end vs back end developer salary, the cleft is quite small. Thus, the average offered salary for back-end developers is $25,800. Yearly wages also vary drastically based on the number of years. An entry level coder makes from $8,400 to $22,560, while a lead back-end specialist gets a raise up to $67,920.

In Australia, the overall tendency for compensation resembles European regions. In total, the average front-end web developer salary varies from $57,455 to $89,544 based on the seniority level and location. 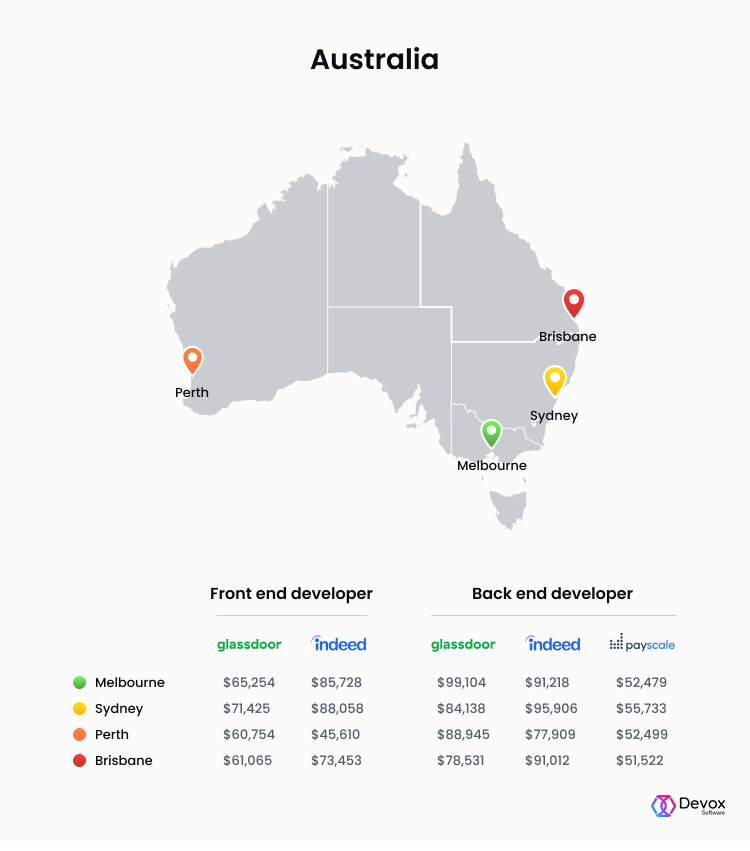 As for the location factor, it directly influences the payment amount. Melbourne and Sydney prove to be the most well-paid tech hubs with the medium front end web developer salary of $85,728 and $86,666, respectively. According to the researched resources, Perth shows wide variations in the amount of pay. Thus, the average front-end developer salary in the region starts at $45,610 and can reach $109,000. Brisbane offers the golden mean of $61,065 to $83,000.

The average front-end developer salary in Canada, according to Glassdoor, Payscale, and Talent.com ranges between $49,336 and $66,120 a year. The jr front end developer salary has the lowest number and reaches the maximum of $40,381. The most experienced workers make up to $80,024 per year, while mid-level workers earn an average of $58,719. 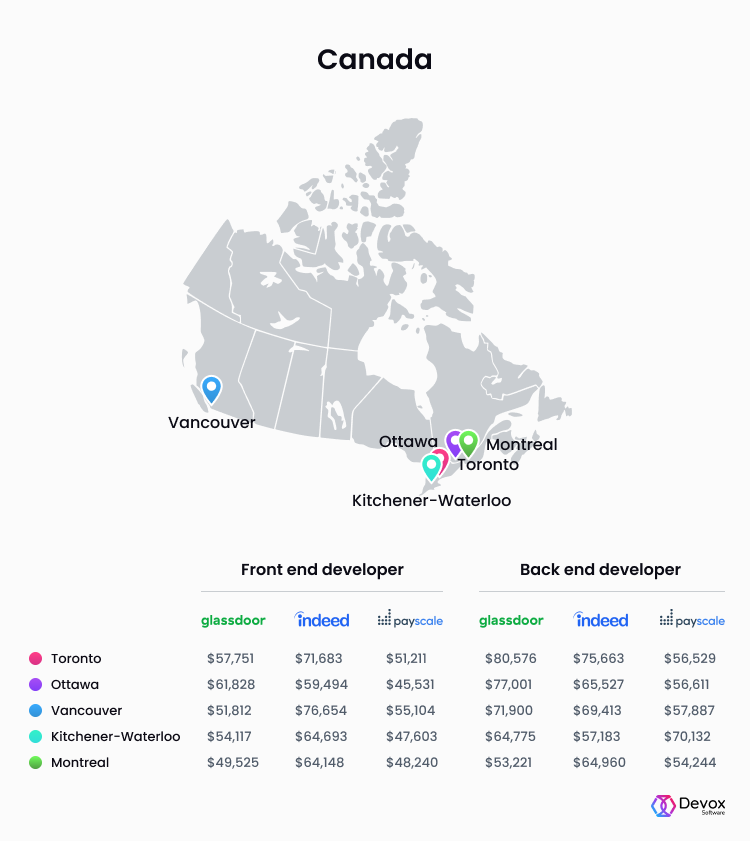 According to Glassdoor, Ottawa heads the list and offers the medium front end developer salary of $61,828. Toronto comes next with a bit lower amount of $57,751. Kitchener-Waterloo and Vancouver are also close to the average and pay $54,117 and $51,812 to local developers. Montreal closes the list with its $49,525 per year.

The nationwide back end developer salary is up to the global mark. Thus, back-end coders can expect to get an average of $99,944 per year. As for the geographical factor, all locations are at similar levels with Ottawa paying the maximum of $61,828.

The average salary in Israel’s high-tech sector stands at five figures. There, front-end engineers get the annual remuneration of $58,761 to $74,139. Seasoned developers are valued higher with a median salary of $101,095, whereas entry-level specialists can expect to make the maximum of $44,114. 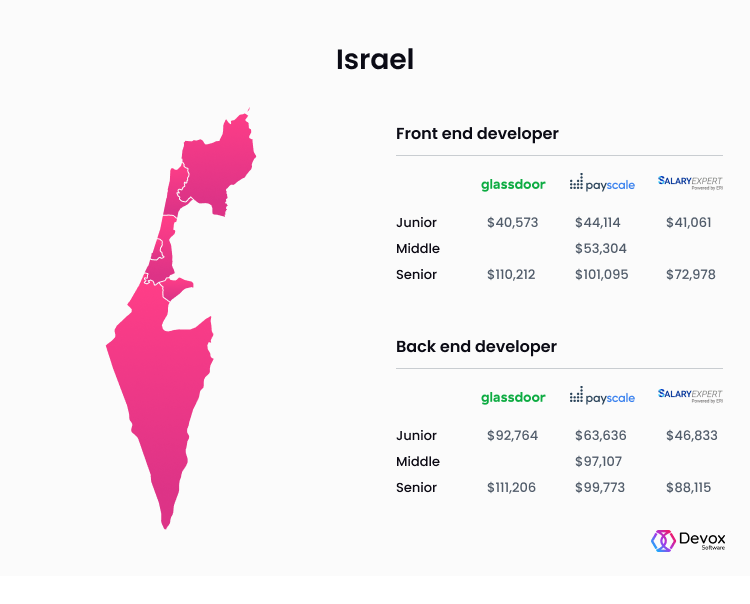 The average back end developer salary is typically larger and grows up to $91,663. Thereby, if you have 5+ years of experience, you can earn as much as $111,206 per year.

Overall, front-end programmers with expertise in JavaScript are the best-paid in their field, according to PayScale. The main reason for a big paycheck is JavaScript’s compatibility with Node.js for back-end. Since the JS runtime environment comes with APIs fit for server-side software development, it makes the whole development process more seamless.

Besides Node.js, such back-end technologies as PHP, Python, and Git also increase the prospects of higher back-end developer salaries.

Over the last few years, front- and back-end technologies have demonstrated resilient popularity. Therefore, the demand for programmers skilled in both fields is ever-growing in 2021.

According to our research, the US, Canada, and the UK have the highest salary among studied locations. The DACH and Benelux regions as well as Israeli come next, yet still setting the bar high. Similarly, the Netherlands and Australia also prove to be among the well-paid tech locations.

Ukraine presents cost-effective hiring opportunities with the most affordable annual compensation. However, the average number can vary greatly depending on experience and local regions.

We realize how hard it is to find the optimum price-value ratio. That is why our dedicated team of developers compile comprehensive front-end and back-end solutions matched with your industry and budget.

Dariia Herasymova is a Recruitment Team Lead at Devox Software. She hires software development teams for startups, small businesses, and enterprises. She carries out a full cycle of recruitment; creates job descriptions based on talks with clients, searches and interviews candidates, and onboards the newcomers. Dariia knows how to build HR and recruitment processes from scratch. She strives to find a person with appropriate technical and soft skills who will share the company's values. When she has free time, she writes articles on various outsourcing models for our blog.

.NET Developer Salary Guide Based on Experience and Location

.Net is one of the most famous and widely used frameworks in software development. This ecosystem is designed and backed by Microsoft to facilitate easy desktop and web application engineering. Also, its re-usable code and object-oriented programming allow businesses to…

What are the current outsourcing trends? That is a million-dollar question that needs a panoptic response. But there’s one thing we all know for sure: IT outsourcing is gathering steam, introducing irreversible changes to global businesses. This statement isn’t mere…

Offshore Software Development: How To Do It In 2021?

Building an in-house team of talented developers can be tricky. Let alone the fact that your company may be based in a well-paid location where experienced software engineers come at a heavy price. Tough competition, escalating operational costs, and scarce…

Got a project
or partnership in mind?

Thank you for contacting us!

You will get answer within the next 24 hours.
Contact us